We are very excited to be able to offer two very unique giveaways for Mother’s Day!!  These two beautiful purses were made with love by a long-time Knit-Rite/Therafirm employee, Gloria Ladines.  Learn about Gloria and her bags from Gloria’s Creations below and click on the link to register to win.  Contest ends on Saturday, May 7 at 11:59 p.m. Contiguous U.S. states only. 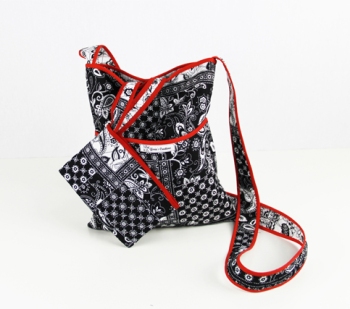 When Gloria Ladines retired from Knit-Rite’s Sewing Department in 2014, the highly skilled and talented seamstress wasn’t able to rest for long.  She put her skills to work making beautiful diaper bags and purses.

Gloria began sewing as a 13-year-old girl in the Philippines, where she eventually opened her own shop making wedding dresses with her sister-in-law.  In 1972 she married Dionisio Ladines, Jr. and together they had three daughters, Laurie, Leonida and Lourdes.  Dionisio then began working towards immigrating to the United States for his family and by 1984 they had been accepted to immigrate.  Gloria closed her wedding dress shop and the family came to the Kansas City area where soon after Dionisio Ladines began working at Knit-Rite.  He had brothers-in-law that were already working at Knit-Rite, so it became a natural fit and a family tradition. Gloria stayed at home raising their daughters.  In 1991, Dionisio and Gloria and their family became U.S. citizens.  Once the youngest daughter, Lourdes, graduated high school in 1996, Gloria began working at Knit-Rite as a seamstress.  For the next 10 years, she and Dionisio had lunch together every day while working.  They watched all three of their daughters also come to work for Knit-Rite – Laurie and Leonida still do!  Dionisio retired from Knit-Rite in 2006, before passing away in 2013. 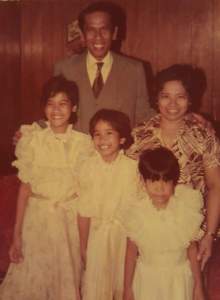 Gloria and Dionisio Ladines and their daughters, Laurie, Leonida and Lourdes shortly after arriving in the United States.

Now in her retirement, Gloria will occasionally work a temporary part-time shift applying her skills and talents to many of Knit-Rite’s products.  But, the majority of her time is spent with her daughters and grandchildren, and making her beautiful purses and diaper bags.  Her bags are extra special because of the amount of love she pours into everything she makes. 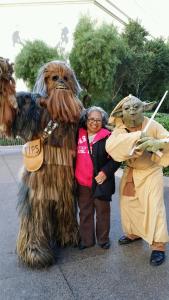 This entry was posted in contest, giveaway. Bookmark the permalink.