Hi Kids!  Do you what today is?  St. Patrick’s Day!  It’s one of my favorites.  What bug doesn’t love a day dedicated to wearing green!  You know what else St. Patrick’s Day reminds me of?!  A big Pot o’ Gold!!

At SmartKnitKIDS, seamless socks are as good as gold.  So, to celebrate St. Patrick’s Day, Bugsette and I put together a big Pot o’ Socks for one lucky kiddo out there!  We’re so excited about the Pot o’ Socks and hopefully you are, too.

Here’s how to play.  See the photo of the big Pot o’ Socks?  Guess how many individual socks you think ol’ McBugsley was able to fit in the pot.  Click on the link below and have Mom and Dad help you make your guess.  The closest guess without going over wins the pot!  (Ties will go to the earliest guesser.) ***

(Mom and Dad, the Pot o’ Socks will also include a $25 gift card to
SmartKnit.com.) 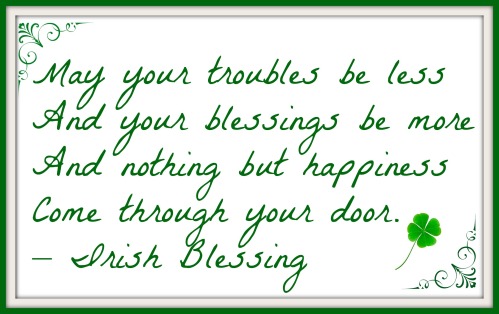 Debunking the Myths of Asperger’s and Autism

February 18 is Asperger’s Day and to observe this, we’ve decided to explore some of the common myths about Asperger’s Syndrome and autism.  Because Asperger’s, as well as all the spectrum disorders, are not easily understood, many people prescribe to several myths common to people with Asperger’s.

Here are several that we found in no particular order:

Myth 1: Children with Asperger’s Syndrome will eventually grow out of it. – Asperger’s is a condition that can improve with treatment, but is something that does not go away.  It is a lifelong condition.

Myth 2: Asperger’s is a just a condition made up by parents to excuse bad behavior. – Wow!  I wonder about the people that truly believe this.  But, no.  Asperger’s syndrome is not made up, but a real, diagnosed condition.

Myth 3: ADHD and autism are the same thing. – Are color blindness and actual blindness the same thing?  Certainly not!  This may be a bad comparison, but it’s good enough to point out that these disorders are two very separate conditions.  Although, it is possible to have been diagnosed with both conditions, they are not dependent on one another.

Myth 4: People with Asperger’s just need to be taught social skills in order to be “normal”. – Normal – that’s a funny term.  Who among us is truly “normal” anyway?!  That aside, there is a whole lot more going on than just social skills.  For one, many people with Asperger’s experience a form of Sensory Processing Disorder – a neurological disorder in which individuals have a difficult time processing the senses.  When individuals with this disorder sense certain things, the brain has a difficult time analyzing them, which can cause confusion or distress.  Find out more about SmartKnitKid’s seamless sensitivity socks and underwear which help kids with SPD.

Myth 6: People with Asperger’s are sociopaths, psychopaths and are prone to violence.  – This is a tough one that invokes a lot of emotion and debate, mainly because it has been heavily reported in the news of late.  In the last few years, we’ve had to come to grips with mass shootings perpetrated by people who are suspected to have Asperger’s – the Newtown, Connecticut elementary school, the Aurora, Colorado movie theater, Tucson, Arizona shooting, etc.  But, to say all people with Asperger’s are sociopaths, etc., is unfair.  Because our attention has been focused on these news-worthy events, many have erroneously drawn this conclusion.  The Interagency Autism Coordinating Committee of the US Department of Health and Human Services released this statement after the Newtown shooting to say that those with Asperger’s are no more likely to perpetrate crimes like these than the general public.

Myth 7: Autism is caused by vaccines. – The debates in the news about Asperger’s and sociopaths can only be rivaled by the debates about vaccines.  Although this one has been thoroughly debunked, the debate still rages on.  According to the reputable organization Autism Speaks, two decades of research have revealed that there is no link between vaccines and autism.

Myth 8: Autism is a new condition. – Although, autism was not actually diagnosed in the modern sense until 1943, there have been several detailed historical documentations of children whose symptoms resemble autism and Asperger’s.  The earliest probable cases appeared in the 1700s, but some writings as early as the 1500s may have been describing what we now know is autism spectrum disorder.

Myth 10: People with autism will never achieve anything. – This is most certainly untrue.  Autistic people can achieve a multitude of things – just like the rest of us.  The website Autism Mythbusters has developed a list of amazing people that may have been on the spectrum.  These include: Albert Einstein, Amadeus Mozart, Sir Isaac Newton, Charles Darwin, Thomas Jefferson, Michelangelo, Hans Christian Andersen, Andy Warholl and Emily Dickinson.  Of course, this is speculative, but that is some amazing company!

We hope you enjoyed Letter Writing Week!  We got lots of great submissions.  Here are a few of our favorites. 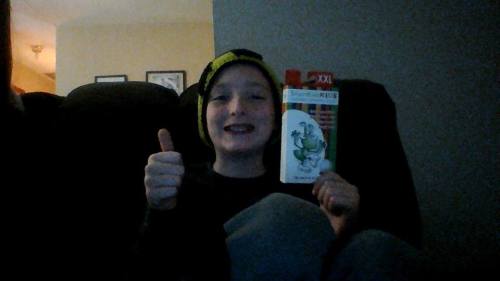 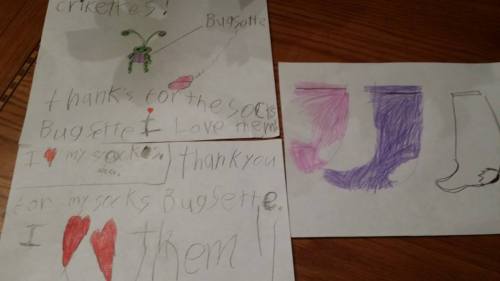 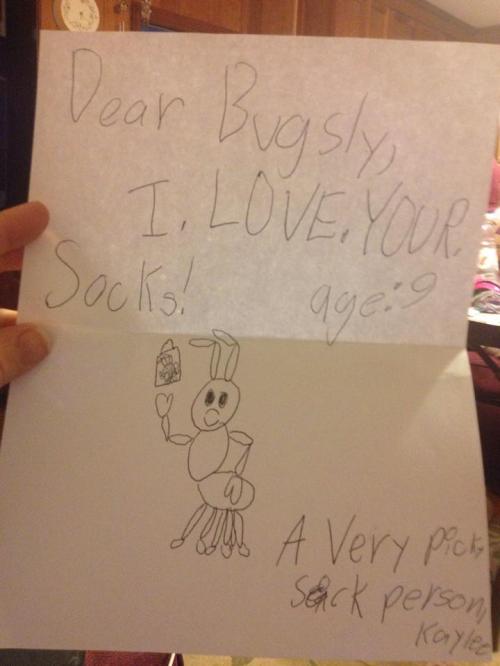 Bugsley loved reading all your letters!  This is his letter back to you!

It’s World Autism Day! We know lots of exciting events helping promote Autism Awareness and Autism Research are happening today. If you know of any, please leave a comment! We’d love to hear and help promote these great events! We’ll also re-post your comment on our Facebook and Twitter pages!

A BIG Thank You to Everyone!

We all here at SmartKnitKIDS wanted to take a minute and thank all of our followers, fans, and customers. We wouldn’t be here without you! We hope your holiday season is filled with fun, family, friends, and good food. (we’ll keep Bugsley away from your feast as he’s known to walk off with some goodies!) All of your reviews, comments, tweets, and posts mean the world to us and we want to thank everyone from the bottom of our big bug hearts! Happy Holidays!

I’m Ready to Rock and Roll!

I know it has been awhile since my last post, but I’m back and ready to write. My little bug fingers are itching to type. The last few weeks have been a whirl wind. Summer is winding down and many of my nieces and nephew are leaving the mound for the first time. They are so excited about striking out on their own. It can be a scary world out there and I hope they will be smart and safe. (they need to avoid fly paper, and shoes) Some of my other nieces started school this year and are so excited! They’ll be learning many exciting things like how to steal picnic food and how to be a good bug. It’s all very exciting!

There are also lots of exciting things happened at SmartKnitKIDS. We are starting to work on adult socks that are similar to the kid’s socks. They will be made out of the same material and they won’t have a heal! I’ll keep you posted on its progress, promise! We’re also starting to get ready to the SPD conference and the Kansas City Autism Walk. We’re very busy bugs.

I’ve got to jet, but I’ll be in touch! Can’t wait to share more of the exciting things that are happening at SmartKnitKIDS.

It’s Almost Back to School Time!

I can hardly believe that its almost time to go back to school! The summer has truly flown by. For all the boys and girls getting ready to start classes, good luck! I hope you have a wonderful school year. For all the parents, summer is over and I’m sure this brings a bag of mixed feelings for some. I wish everyone a great, fun, safe, bug free school year!

Back to School Givaway Reminder

It’s August and that means our contest is coming to end very soon. The deadline to register is August 21st. We are giveaway some great stuff in honor of back to school and we would love it if you would enter!

1 Grand Prize will be awarded:

Posted in back to school, contest, giveaway, seamless socks, smartknitkids

I love socks. I would live in a big, comfy sock if I could. Better yet, a city made of socks. (It would be so soft. No more scrapped knees when I fall) That’s why I like SmartKnitKIDS socks so much; they’re so comfy and they don’t bother my toes. I know many of you may not believe me when I enthusiastically go on about SmartKnitKIDS socks. I wanted to share a great review of the socks written by Things Moms Like. It’s great website that reviews products, sponsors giveaways, and writes about life. Check out their wonderful review of SmartKnitKIDS Seamless Socks for kids who hate sock seams.
http://thingsmomslike.com/2009/07/28/smartknit-kids-seamless-sensitivity-socks-back-to-school-giveaway-814/#respond

For more information about Things Mom Like, please visit them online at

SmartKnitKIDS Seamless Socks are currently being featured as one of the best and hottest products with MetroPlex Baby and Kids. They provide resources for families from pregnancy through teens in the Dallas-Fort Worth area and beyond. You can check it out at http://www.metroplexbaby.com/MetroMoms/2009/20090723_BestHottest_Feature.htm#the_products
You can also fine MetroPlex Baby and Kids on twitter and facebook.

Thanks Metro Moms for choosing us to be apart of your great event!